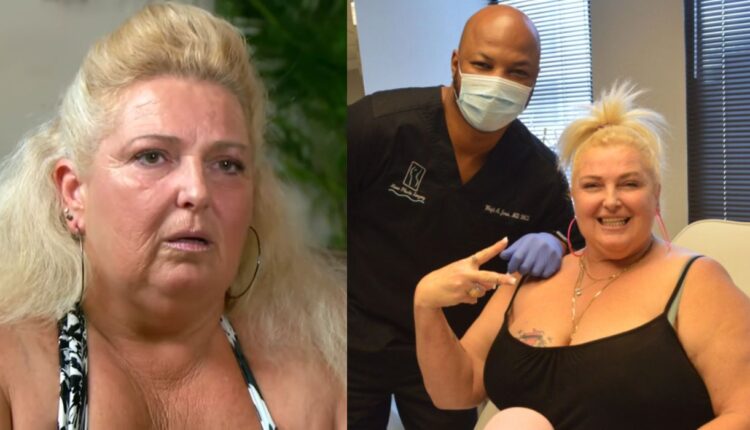 90 Day Fiancé’s Angela Deem has been getting flirty with many men after weight loss, and her confidence is creating controversy among fans.

Since losing over 100 pounds, Angela Deem from 90 Day Fiancé has been seen getting quite cozy with other men. She’d struggled with her weight throughout her life, and as she aged, she noticed that her weight gain was negatively impacting her quality of life. While speaking with her grandchildren, she explained her need for weight loss surgery. “I keep getting fatter for unknown reasons,” the “meemaw” explained on the reality series, adding that she needed to “get help.”

Michael Ilesanmi, Angela’s husband, was concerned about the bariatric procedure, and became unsupportive. In an emotional moment, Angela told Michael that the surgery was necessary for her health, but Michael was worried about how it would change her body, especially her breasts. 90DF’s Michael’s shocking reaction stunned fans. In addition to the gastric sleeve and breast reduction operations, Angela had liposuction, and got two hernias repaired. While it is unusual to combine liposuction and gastric sleeve surgery, the repair of hernias is commonplace. Some doctors also recommend breast reduction at the same time, as that procedure makes some workouts easier. Since the initial surgeries, she has had her breasts enlarged, gotten a facelift, had loose skin removed, and undergone a cosmetic hand procedure. She even joked about getting a Brazilian butt lift.

SCREEN VIDEO OF THE DAY

The grandmother has been seen living her best life, and has been caught flirting with her plastic surgeon, dr. Michael K. Obengand other men. Reacting to that moment, Angela told ET Online“I’m a big flirt, my mom was, but mine’s harmless. I’ve never cheated on none of my spouses. He can trust me, but I can’t trust him.” She also said that she was giggling because she was nervous. Angela has become more coquettish for a number of reasons. Since her weight made some aspects of her life stressful, Angela’s extreme weight loss journey may have given her a sense of freedom. Combine that with the fact that Angela seems to thrive on controversy, and there is no question that drama will follow her.

Weight loss surgery, particularly for patients who lose a lot of weight, are linked with higher divorce rates, as shifts in self-confidence levels and lifestyles change dynamics. That seemed to be a problem for Angela and Michael, which was exacerbated due to the long-distance nature of their marriage. With Michael’s dismissive (and borderline hostile) attitude, and the increased attention that Angela’s new body has been receiving, fans are wondering if Michael and Angela have called it quits.

Weight loss surgery definitely has the capacity to change how people interact with the world. In the past, it’s quite possible that Angela may have felt hindered by her weight, but those challenges are in the past. While shopping, Angela said, “as a bigger woman, you know, i just didn’t feel comfortable. But today, putting on these clothes, I really felt myself.” Feeling herself has perhaps made her flirtier, as she has become more confident about her appearance. Even though Angela is loving her thinner figure, fans have not reacted well to the changes in the crass “meemaw” of six. In fact, Angela has lost viewer support.

Is Angela Deem A Hypocrite?

Angela’s flirtatious nature has been documented across seasons of the show, and so have her extreme reactions to Michael receiving attention. Fans question Angela’s double standard, noting that if Michael flirts with the same number of women, Angela would break up with him again. When Angela flirts with Chuck Potthast, father of 90-Day’s Elizabeth Potthast, to rile up Michael, he shook his head, and then stated that she’d always acted that way. He also seemed embarrassed, as he told her to stop being so flirty. Only time will tell if Angela’s wild flirting can be tamed as she adjusts to her new body, or if it’s indicative of a larger shift in the 90 Day Fiancé icon Angela’s relationship. She would certainly be a controversial fan favorite on 90 Day: The Single Life.

Next: 90 Day Fiancé: When & How The Angela Deem & ‘Sojaboy’ Was Really Began

Alicia Privette is a freelance Reality TV writer for Screen Rant. Based out of the Washington DC area, her partner, four children, dog, and guinea pig enjoy spending time traveling domestically and internationally, frequenting restaurants and breweries, and watching television and movies. Freelance writing is a passion and side hustle, with Alicia’s day job being an elementary school teacher and administrator for 17 years.