UAE: A newly-wed expat in Dubai ends up on a wheelchair with flesh-eating bacterial infection after cosmetic surgery goes awry 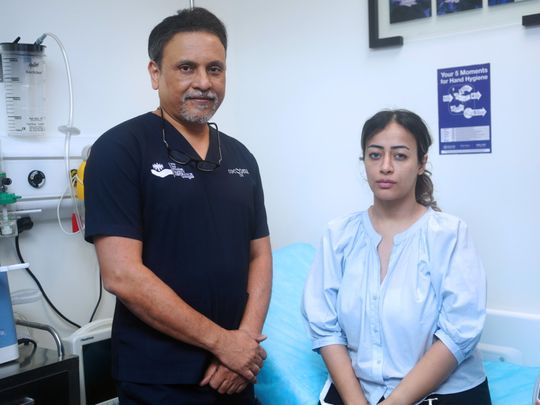 Dubai: Doctors in Dubai have saved the life of a newly wed woman who ended up in a wheelchair with flesh-eating bacteria devouring her limbs after a cosmetic surgical procedure she had in another country went awry.

Flesh-eating bacteria or necrotising fascitis is a rare infection of the skin and body tissues that can turn deadly if it is not treated on time.

Sharing her horrific experience exclusively to Gulf News, Fatima Amin, a 30-year-old Egyptian expat who works in the realty sector in Dubai, said: “I’ve just been through the worst experience of my life, but am thankful I am alive.”

It all began when Fatima came across a social media ad by a seemingly state-of-the-art hospital in another country that offered a combination of liposuction and skin tightening to remove excess body fat.

“The offer comprised a weekly package, covering not just the procedure and necessary treatment, but also hotel stay, to and from flights and airport transfers. The whole package cost $6,000 and I found myself being drawn to it,” revealed Fatima.

Deciding to take up the offer, Fatima paid up the due amount and was on the plane a few days thereafter to avail the offer. “I always dreamed about losing some weight, so I really looked forward to the trip and the procedure.”

What followed, however, was a nightmare.

Fatima said to begin with, the procedure was not done where promised, and she was discharged from the place the very next day, with no sustained medication or follow-up treatment. “I was given to understand that I would have to stay in the hospital for seven days for post-operative care, but on the contrary I was asked to go a hotel without even a painkiller.”

Dr Sanjay Parashar said Fatima Amin could not walk and was in severe pain when he first saw her. She also had a VAC machine on all her four limbs.
Image Credit: Clint Egbert/Gulf News

In severe pain, Fatima, who also began to feel weak, contacted the medical team, who then sent her the medicines and reassured her that all was well. As the days passed, however, her condition got worse and her limbs infected.

“I was alone, terrified and barely able to walk. Which is when my husband in Dubai and I decided I should fly back,” she said, adding that she had to endure a veritable ordeal at the airport too.

“I struggled to stand, let alone walk, and could not get a wheelchair immediately. I also had to go through several formalities to get on the plane and when I finally did, I was miserable.”

When she landed in Dubai, her husband Hamza Idris was waiting for her with an ambulance that took her straight to a private hospital.

“The flesh-eating bacteria had wreaked havoc on my body and the wounds in my arms and legs had widened, with pus oozing out,” she said, adding, “At one point, there were fears that I could even lose a limb. ”.

Fatima, who underwent eight-10 rounds of blood transfusion, said she was in the hospital for three weeks.

Her despaired husband, who had been looking for a good plastic surgeon to take the treatment forward, said, “A friend referred us to Dr Sanjay Parashar at the Cocoona Clinic in Dubai who heard us out and conducted two operations at another private hospital. He managed to clean up the wounds and brought my wife’s pain under control. She is now walking again.”

When contacted, Dr Parashar, who is the Chairman Scientific of the Emirates Plastic Surgery Society, told Gulf News, “When I first saw the patient, she had a VAC machine on all her four limbs to drain out fluid.”

He explained how VAC or vacuum assisted closure is a type of treatment to enable the wound to heal by decreasing the pressure on the wound. “She was also on a urinary catheter and could not walk. Her haemoglobin was low. She was on clot-preventing medication, besides painkillers.”

He said he had to put her under general anesthesia to examine the wounds, which thankfully had healed to a large extent by the time she came to him. “The wounds were huge and we had to pull the skin together by putting special stitches, following which the VAC machines were reinstated to keep the loss of blood and fluids to a minimal. The catheter was removed within 24 hours and in two days’ time, she went home and was able to move around.”

On the road to recovery, Fatima said the whole experience had taught her a few hard lessons. “Never risk it when it comes to your health. Never ever get taken in by promotions and offers, especially on social media, without double-checking their credibility. It can even cost you your life.”

Sharon Osbourne, 70, looks VERY fresh-faced as she steps out with family in LA