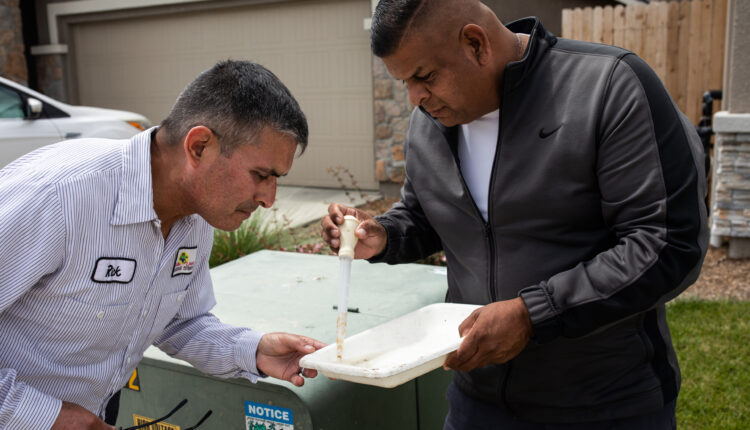 VISALIA, Calif. — Bryan Ruiz moved his family into a newly built home in this Central Valley farming center seven months ago and almost immediately found they were under assault.

Mosquitoes bit and harassed them in broad daylight. He looked around, trying to find a water source where they were breeding, and noticed a freshly dug pipe, meant to drain water from the backyard to the front. He lifted its cap and inside found a small puddle in the drainage line, which didn’t have enough slope to fully empty.

He grabbed a turkey baster and drew water, already knowing what he would find: the larvae of Aedes aegypti, one of the greatest threats to humans on the planet.

Ruiz knew what he was looking for because he is in charge of a newly formed team that spends the summer months traveling around northern Tulare County to combat the invasion of Aedes aegypti, a mosquito capable of infecting humans with the deadly diseases of dengue, chikungunya, yellow fever, and Zika.

Since gaining a foothold in California less than a decade ago, Aedes aegypti has spread quickly across the state, its territory now ranging from the desert terrain of Imperial County at the U.S.-Mexico border to the city of Redding in woody Shasta County, about 750 miles north.

To combat aegypti, mosquito control districts rely on the same tools they were using decades ago — pesticides and rooting out water sources — even as climate change and agricultural practices are allowing the mosquitoes to thrive in places previously uninhabitable.

But Tulare County officials hope the region will soon be a testing ground for a new generation of technology, including a genetically modified mosquito, as they try to prevent the kind of disease outbreaks now common in regions of the Caribbean and Central and South America where Aedes aegypti is widespread.

The most immediate mosquito danger in Tulare County comes from a different genus, Culex, a type that typically bites at dawn and dusk and can carry West Nile virus, St. Louis encephalitis, and western equine encephalomyelitis virus, all of which can be fatal. Over the past decade, California has registered more than 4,000 cases of West Nile and at least 220 deaths. Tulare’s mosquito control districts have poured extensive resources into that battle, including releasing a range of chemicals, maintaining a hatchery for larvae-eating fish, and, most recently, buying a drone to ferry pesticides deep into cornfields.

Aedes aegypti, however, is a growing concern, and much harder to combat.

Rick Alvarez, vector control supervisor for the Delta Mosquito and Vector Control District, checks on an abandoned backyard pool in Tulare County that has become a breeding ground for mosquitoes. (Anna Maria Barry-Jester/KHN) 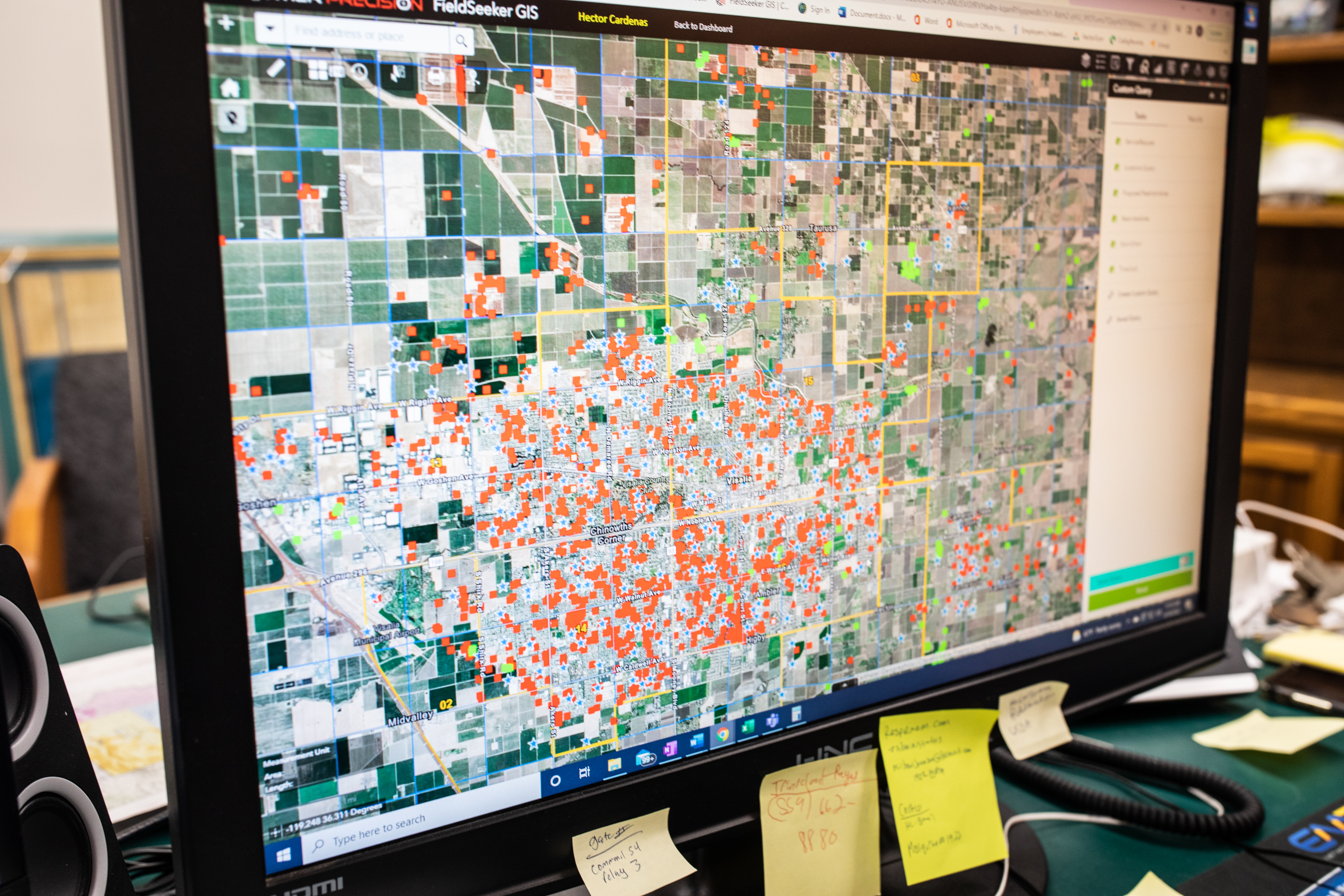 The Delta Mosquito and Vector Control District in Tulare County, California, tracks locations where mosquitoes have been reported so technicians can respond and work to curb the populations by draining water sources and spraying pesticides. (Anna Maria Barry-Jester/KHN)

To understand this fight, you first have to understand just how stealthy Aedes aegypti is. The mosquitoes can lay eggs in spaces as small as a bottle cap, and females spread their eggs across multiple locations — scientists often refer to their “cryptic habitats.” Most other types of mosquito eggs need water to survive, but Aedes aegypti’s can lie dormant for months, springing to life when water eventually does come. And one mosquito can bite many times over, snacking repeatedly on the same human or moving from one to the next. They become a lethal threat if one of those people happens to be carrying dengue or some other virus.

In an increasingly global world, people regularly travel to places where dengue is endemic and bring it back to the U.S. If a mosquito bites them, the illness can spread locally. That’s what happened in the Florida Keys in 2020, and more than 70 people were infected before the outbreak was stopped.

California so far has avoided local outbreaks of the diseases carried by Aedes aegypti. But it does import cases — California has registered seven cases of imported dengue this year — and with the mosquito population growing, experts say it’s likely only a matter of time.

Aedes aegypti is a frequent flyer, traveling the world in cargo. It no doubt has been introduced into California millions of times. But it wasn’t until recently that it took hold, said Chris Barker, an associate professor of pathology, microbiology, and immunology at University of California-Davis. It was first detected in 2013 in three California cities: Menlo Park, Clovis, and Madera.

Today, Aedes aegypti has spread across more than 200 California cities and 22 counties. And it has strained mosquito control districts. “It’s been a lot of extra work, extra staffing, extra financial demand,” said Barker. “And regardless of disease risk, a huge issue is the nuisance biting.”

Because of the threat the mosquitoes pose, when aegypti was detected in 2014 by the Delta Mosquito and Vector Control District, where Ruiz works, the district rushed to stamp out the menace. Its eradication method required searching every nook and cranny of the area where Aedes aegypti had taken up residence and cleaning out water sources multiple times a week. People were so annoyed by the full-court press, said the district’s assistant manager, Mir Bear-Johnson, that nearly five years passed before that community reached out again. Which was a problem, because the district partly relies on reports from residents to know where mosquitoes are. 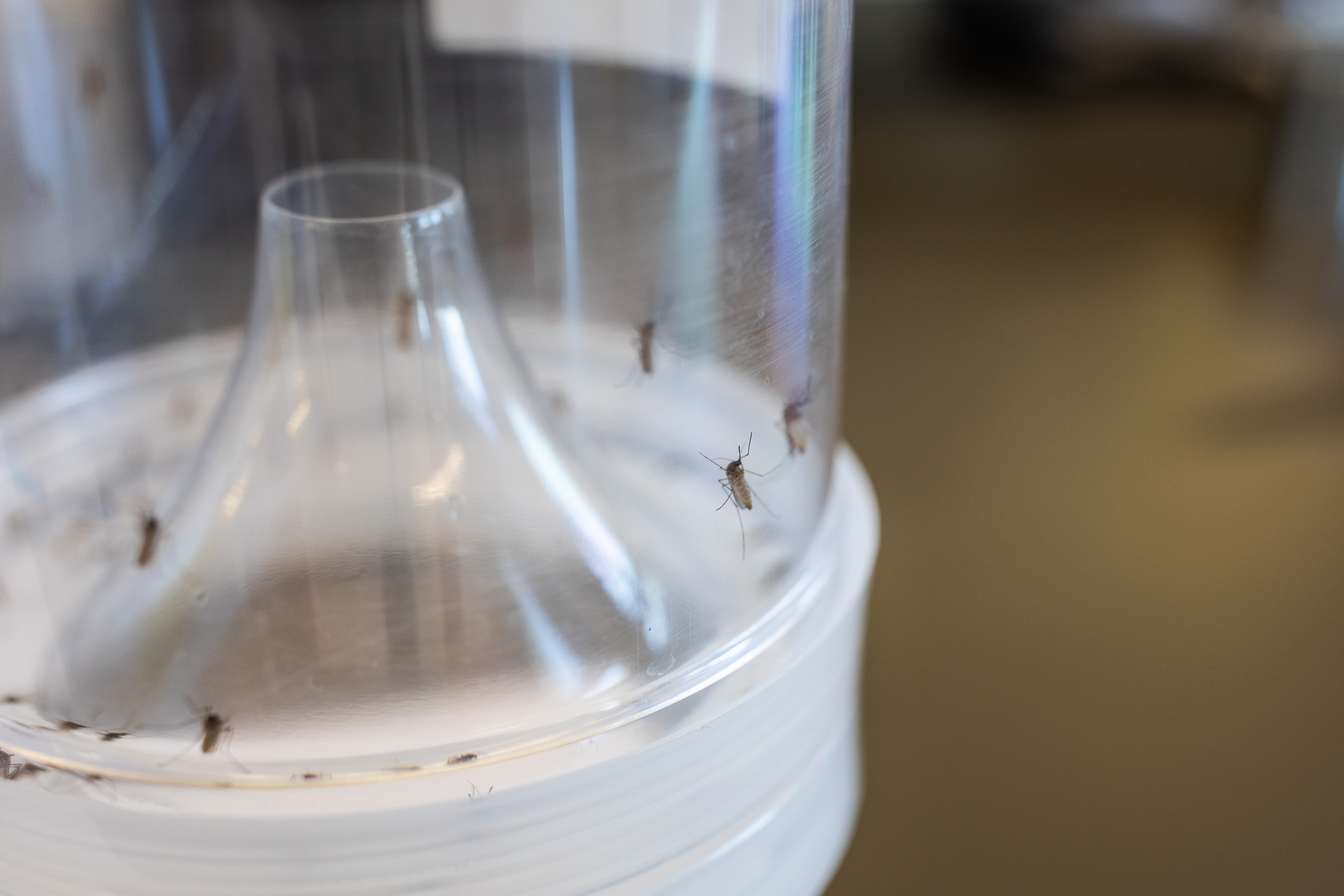 The eradication was also short-lived. In 2015, Aedes aegypti was reintroduced, and this time the ferocious biters spread out across Visalia, the area’s largest city. Because Aedes aegypti can now be found all around the Central Valley, eradication no longer feels like an option, said Mustapha Debboun, an entomologist who moved from Harris County, Texas, in March 2020 to lead the Delta district.

Aedes aegypti mosquitoes in the area are also broadly resistant to pyrethroids, the family of chemicals most frequently used to kill adult mosquitoes. Pyrethroids are in heavy use among the area’s agricultural companies, likely contributing to what Barker described as nearly 100% resistance.

Which is why Debboun and colleagues are interested in the genetically modified mosquito. Their hope is that the engineered mosquitoes reduce the number of wild Aedes aegypti as they interbreed and produce short-lived offspring.

The U.S. Environmental Protection Agency recently approved a trial in Tulare of the engineered mosquito, which is made by a company called Oxitec. The company says its latest product releases only male mosquitoes, which unlike females do not bite. The mosquitoes are genetically modified to carry a “self-limiting” gene that is passed on during breeding and theoretically prevents the offspring from surviving to adulthood. They have been released in several places, including Brazil and the Cayman Islands.

They also were released in the Florida Keys last year. There, Oxitec faced pushback from some homeowners concerned about the unanticipated risks of releasing genetically modified pests into the wild. Local officials put the issue on the 2016 ballot, and county residents, who by then had confronted both dengue and Zika, voted to go forward.

Now, Oxitec and the Delta mosquito district are waiting for permission from the California Department of Pesticide Regulation to launch the insects. The work would be funded by Oxitec, Debboun said, with operational assistance from his staff.

The goal is to build on the earlier research, which shows that the modified Aedes aegypti temporarily reduces the wild mosquito population but has left scientists with questions about the broader effects on the environment and how well the effort works in the long run to reduce disease. Among the unknowns is whether the Oxitec mosquitoes are indeed incapable of producing viable offspring with wild females.

Another question, said Barker, the UC-Davis expert, is what happens when Oxitec’s mosquitoes encounter tetracycline in the wild. Tetracycline is an antibiotic commonly used to control infection in livestock and agriculture, both of which are found in abundance in the Central Valley. Oxitec mosquitoes are bred with a sort of off-switch that shuts down the self-limiting gene when they come into contact with tetracycline. In the lab, this off-switch allows the company to breed the engineered mosquitoes. If it is triggered in the wild, the concern is that the mosquitoes’ offspring wouldn’t die out. 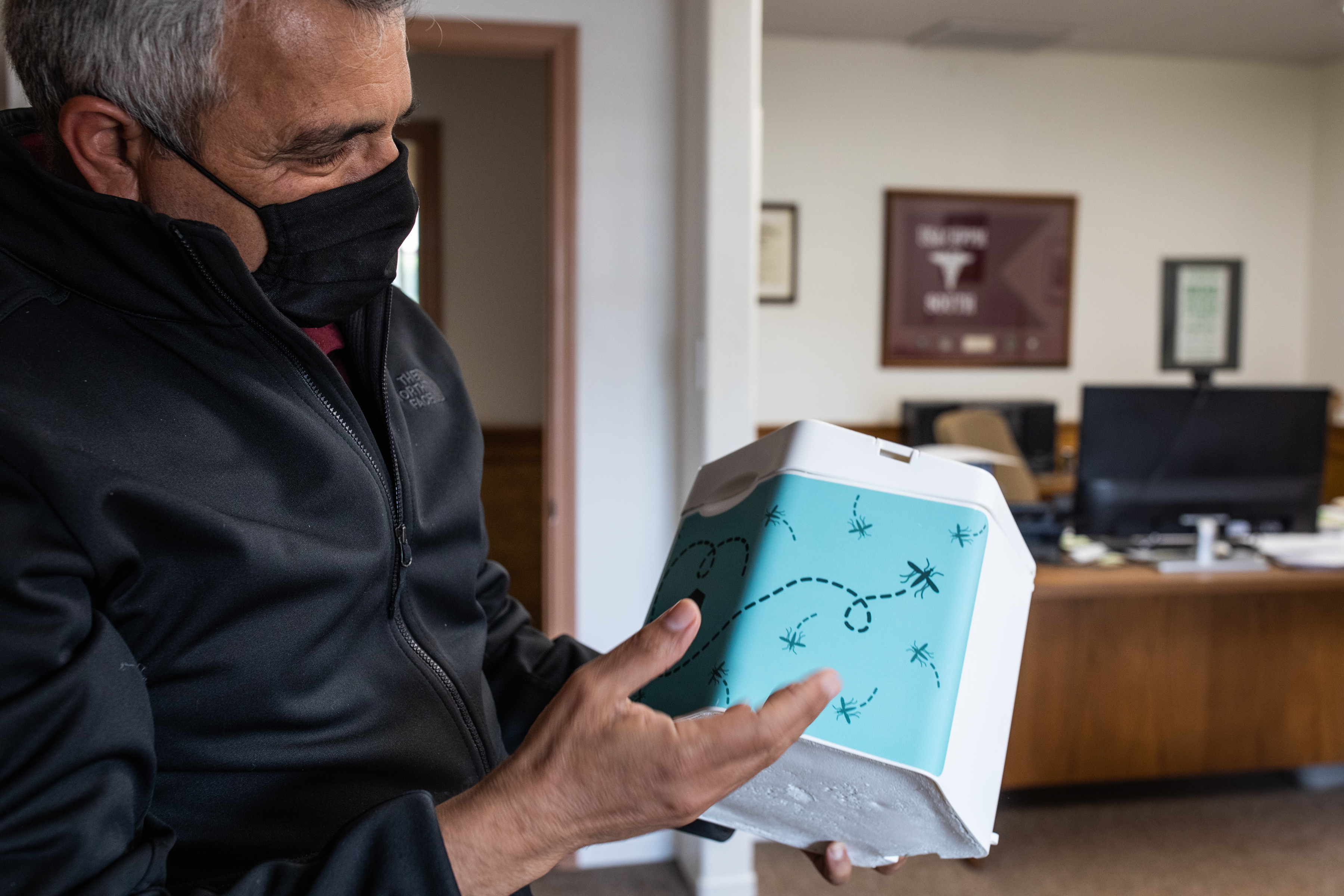 Mustapha Debboun, general manager of the Delta Mosquito and Vector Control District, holds a prototype for a mosquito-abatement product Oxitec eventually hopes to sell directly to U.S. consumers. If all goes as planned, consumers would add water, and the company’s engineered mosquitoes would spring to life. (Anna Maria Barry-Jester/KHN)

On a broader level, Barker said, he hopes California will independently track the experiment. He is among the researchers concerned about leaving that analysis in the hands of a private company that stands to benefit. “If an independent source and the company are in agreement when all the results are done, that has much more power and much more potential for the future,” Barker said.

Rajeev Vaidyanathan, director of U.S. operations for Oxitec, said Tulare’s Delta Mosquito and Vector Control District was among several districts interested in hosting the trial. Among the selling points was Debboun’s enthusiasm for new technologies.

Debboun previously helped run a trial in Houston of a product called MosquitoMate, which releases male mosquitoes infected with the bacteria Wolbachia. When the MosquitoMate mosquitoes breed with wild females, they produce eggs that do not hatch. Those mosquitoes were also tested in Fresno County in 2018 and 2019 and led to a 95% reduction in female Aedes aegypti, according to a study on the trial. Even so, that mosquito district told The Fresno Bee it didn’t have the money to continue the project on its own.

“These are the fantastic, glittery options,” said Eva Buckner, a University of Florida assistant professor who advises Florida’s mosquito control districts. “I think they have a lot of potential.” She wants to know what the cost-benefit ratio would be for widespread use by government agencies compared with other interventions — a question the Tulare research could help determine. And regardless of price, she cautioned, there’s not going to be a silver bullet for mosquitoes, which have endured on Earth for millions of years.

Oxitec wanted to test its technology in arid Central California, Vaidyanathan said, because it could show it can work throughout the Aedes aegypti-invaded Southwest. Oxitec hopes its mosquitoes eventually will be sold to mosquito control districts in the U.S., and directly to American consumers. That option is already available in Brazil, via a consumer subscription service that costs $10 to $30 a month. In the U.S. prototype, the mosquitoes would come in a hexagonal box decorated with playful insects. If all goes as planned, consumers would just add water, and the mosquitoes would spring to life.

How Pfizer Won the Pandemic, Reaping Outsize Profit and Influence

Crowdsourced Data on Overdoses Pinpoints Where to Help