In retrospect, 2021 was the year of the nose 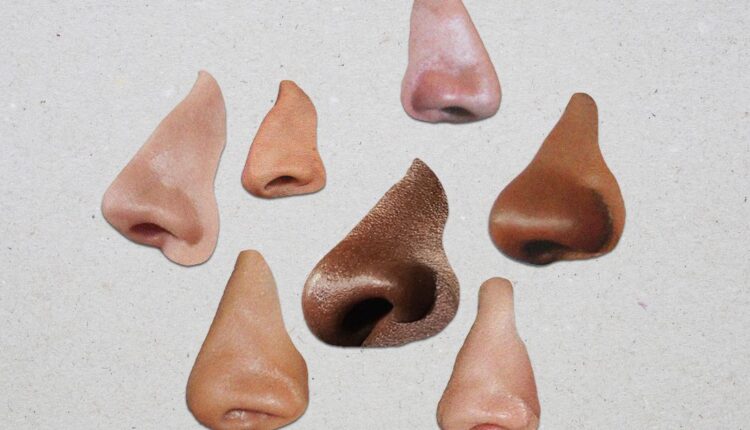 This year, a series of videos surfaced on TikTok with users turning around to show the side profile of their nose and mentioning their ethnic background. “To flaunt the Arabic noses of my mother and me,” said a user who participated in the trend. “I used to hate my big black nose, now I’m obsessed,” wrote another. The idea was to celebrate noses of different ethnicities, and far from the usual nose job content that can be found in the app – or through Instagram filters that thin the bridge of the nose and the tip of the nose – the trend was aimed at especially highlighting larger noses that do not adhere to the Eurocentric standard of beauty.

2021 was a big year for noses. One of the most anticipated films of the year, House of Gucci, brought this idea home with strong noses (hello Lady Gaga and Adam Driver). There was also an increase in nose-oriented makeup and accessories: there were fake freckles; Nose contouring hacks; and nose jewelry. Hunter Schafer wore stark silver statement nose jewelry to her first Met Gala, created by Evangeline AdaLioryn, and Gucci’s latest campaign was full of nose rings. From makeup artists, we see nose jewels, futuristic-looking nose decorations, and even accent makeup on the nose.

Gabrielle Glaser, author of four books including The Nose: A Profile of Beauty, Sex, and Survival, says noses considered “beautiful” often reflect what is going on in society. “Originally, rhinoplasty began to replace noses lost in battle [during World War I] or were eroded due to diseases like syphilis, ”she says. Glaser says that in the era immediately following World War II, women were expected to look the same – Judy Garland, Shirley Jones, and Debbie Reynolds – and therefore dictated the American white body ideal and nose to go with beauty standards. “There were great expectations of national conformity, especially for middle-class whites – be patriotic; move to the growing new suburbs; to watch the same TV shows and hear the same music. “

Brooke Ozaydinli, creator marketing manager at Instagram and host of the Naked Beauty podcast, says the shift to experimenting with nose makeup is partly because she was masked for a long time. “I think the nose takes up so much space on our face that was previously ignored,” she says. “We see young creatives on Instagram who see their face as a canvas so that you can no longer ignore your nose.”

At one end of social media, previously unhappy noses have been celebrated, and yet nose job videos are still rife across all platforms. (There were also the bizarre ski jumping virus videos that showed less of a surprise with their noses up.) What looks like contradicting narratives may be less polarizing after all, says Ozaydinli, who views online plastic surgery documentation as transparency procedures that are badly needed . “I love that people don’t find it embarrassing or pretend they were born that way.” Ozaydinli also says that nose jewelry, which is becoming more mainstream, is part of the current breakdown of Western beauty standards.

Dr. Melissa Doft, two-time certified plastic surgeon and founder of Doft Plastic Surgery, says this year saw a change in requests for nose jobs. People are still getting them but now they are different, many of their patients are choosing a more natural transition. “Patients want to correct crooked noses, asymmetry, bumps and wide nostrils, but they also want to hold onto their ethnic identity,” she told The Cut. “There is no longer one nose for everyone, but each nose is individually tailored to the patient’s face and ideals of beauty.” It is worth mentioning that between 2000 and 2019, nose corrections fell by almost 8 percent.

The fashion and beauty industry’s obsession with the little puffed up nose is far from over, but 2021 brought a much-needed change in direction. No longer ashamed or hiding their nose, people begin to consider their nose as a defining feature.

Designer Celest Salgado Morale has an influx of people interested in her coiled wire nose jewelry and handcrafted nasal cuffs. Morale started making the nose pieces for himself, sharing them on social media, and “almost overnight” people asking where to buy them. The more unconventional designs were the most popular, she says.

“Little by little, we’re letting go of Eurocentric beauty standards and becoming more proud of our properties,” she says. “I think eccentric nose-setting jewelry is a great result of that. In the past people didn’t want to emphasize their nose at all, but I’m glad that has changed and that people are taking on their facial features more. “

Fernanda Pigatto, Global Marketing Director at Beauty Trend Insights Source Beautystreams, believes it will stay that way: “The trend to underline the diversity and individualism of nasal beauty will become more and more mainstream in 2022 and beyond.”

While it would be naive to believe that the standard of beauty of the small, sloping nose is dead, our thoughts and standards regarding the nose have long since changed, as society does – and there have been a number of global changes recently ( the pandemic is just one of them). Just like in the late 1960s and early 1970s when Glaser says the widespread availability of the pill and legalization of abortion gave women more choices about their bodies and led to a revolt against “equality,” 2021 has one too Step taken towards uniqueness. In an age of the Instagram face, the variety of nose shapes has become a way to stand out, and larger noses are slowly taking their rightful place in beauty – front and center.

Get the Cut newsletter every day

The 33-year-old woman, referred to as “obese” by doctors, is collecting donations for liposuction