How I became a ‘dentist’ in just five hours 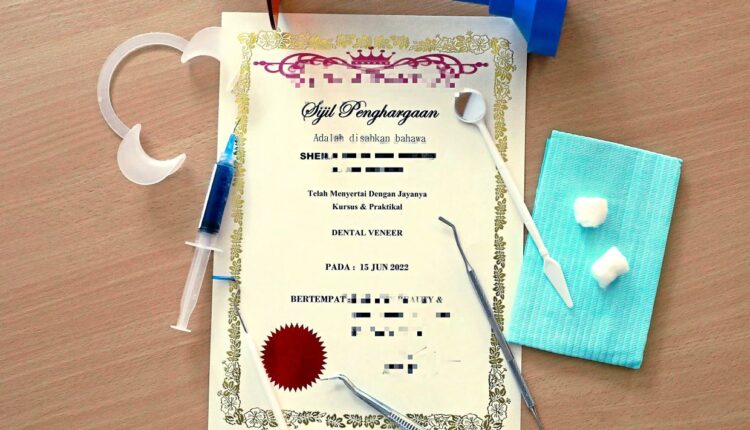 PETALING JAYA – It takes six years to be a fully registered dentist in Malaysia. But why wait when it takes just five hours using dubious methods.

This journalism-trained reporter is now a certified “dentist”.

The training center is a tiny shop on the ground floor of a down-in-the dumps low-cost flat in Setapak and the trainer “Hayati” offers a host of dental procedures.

The course for the day was fixing veneers.

Hayati had secured a volunteer, a young Indonesian woman who had consented to be the patient for the duo to test their newly acquired skills.

The woman apparently had been a regular feature at the salon and Hayati would regularly use her for various beauty courses.

It was obvious that the young woman was nervous as she opened her mouth wide.

She had good teeth so it was rather puzzling as to why she would sit in for the veneer-fixing procedure.

A mouth retractor, which looked far from sanitary, was inserted into her mouth.

The woman grimaced. And in a hardly audible voice, she mustered: “Is this going to be painful?”

Hayati reassured her that it would be okay before continuing to mold 16 of the woman’s teeth with white composite, which made her look ghastly.

The whiter-than-white teeth were unnatural.

After three hours of lying on her back on a tattered massage bed that was wet with saliva, she finally sat up.

Licking her newly veneered front teeth, she asked “It feels weird. Is this how it is supposed to feel?”

Hayati told her that in two to three days, any pain would be gone and she would be able to enjoy her porcelain white teeth.

She told us later that assuring clients was part of the “game”.

In the event the client wanted the veneer removed, which is common, the charge would be RM50 per tooth.

A trained dentist told The Star that such procedures should not have induced pain.

“As professionals, we learn about human muscles on our faces that connect to our teeth. If that is not taken into account, when your jaw moves, the veneer could break and you could hurt your gums,” he said.

After the five-hour lesson, the reporter and her “coursemate” were given a certificate for completing the dental course as well as a starter kit to get into the business right away.

The coursemate, who had already dabbled in the industry, was going to apply what she learned as soon as she got home.

Before the course started, Hayati had just ended another beauty course with a student from Batu Pahat who learned how to administer beauty injections.

For the RM1,500 she charged the student, she had the learner carry out the procedure on her. After the class, she had a badly bruised and bloody arm.

The day this journalist attended the course, Hayati earned about RM5,000 from her three clients. Her business runs non-stop, sometimes even during the weekends.

She claimed that her “centre” is the best place to learn all about fixing dentures, braces, whitening injections, platelet-rich plasma injections for hair and face, as well as facelifts.

“A student of mine who does facelifts earns about RM1,000 to RM2,000 a week now. My Indonesian friend tells me she gets about RM20,000 per month,” she said, obviously proud of the kind of money the illicit business brings.

Hayati’s operations is a no-frills business. The less-than 200sq ft unit holds a small massage bed which doubles as the dentist’s chair. It is next to a small toilet, sewage pipe and back alley drain.

The stink is unbearable.

To supplement her already lucrative business, Hayati said she has her own local supplier for all the equipment needed for her “operations” and that she is willing to supply her students all that they would need.

Breast Implants for Reconstruction After Mastectomy

Why Men Are Getting The “Executive Edge” Suite Of Procedures