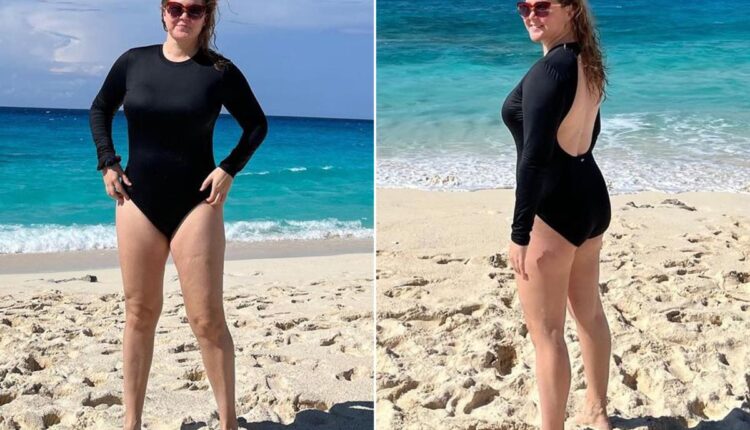 Amy Schumer said she “finally” feels “good” after a lengthy battle with endometriosis and a bit of liposuction.

The stand-up comedian showed off the results of her procedure with a photo of herself wearing a bathing suit on the beach, writing on Instagram Tuesday, “I feel good. Finally. It’s been a journey thanks for helping me get my strength back @seckinmd (endo) @jordanternermd (lipo).”

Schumer joked she “never thought” she’d go for plastic surgery but decided to after her uterus didn’t “contract for 2.5 years and you turn 40.” (Her birthday was in June.)

She also credited her acupuncturist and The Tox spa for rounding out her health and wellness journey.

Amy Schumer showed off the results of her liposuction.amyschumer/Instagram

On her Instagram Story, Schumer reposted the beach photo and revealed she’s down to 170 pounds.

Fans lauded her candor, with one writing in the comments section, “Thanks for being so honest about your body.”

Added another, “You look great, but more importantly, you look HAPPY.”

The “I Feel Pretty” star, who shares 2-year-old son Gene with husband Chris Fischer, announced in September that she underwent surgery to remove her uterus and appendix to treat her endometriosis.

“All my lifelong pain explained and lifted out of my body,” she said in an audio recording posted on her Instagram. “I am already a changed person.”

Schumer revealed in December that she tried fillers in her face but ultimately decided against them and had them resolved.

“I tried getting fillers,” she captioned a candid selfie from the dermatologist’s office. “Turns out I was already full.”

When a fan commented asking Schumer why she tried fillers, the star replied that it was “something about this year” that prompted the procedure.

“Turning 40 all my surgeries I want to feel the best I can about myself,” she wrote. “I got lipo and I had a great experience doing that. I used to be really [judgmental] about people getting work done. Now I’m like, do everything you can to love yourself exactly as you are but once you turn 40 and have ac section do whatever the f—k will make you feel best!”

How I became a ‘dentist’ in just five hours

UAE: A newly-wed expat in Dubai ends up on a wheelchair with flesh-eating bacterial…

UAE: Newly-wed ends up on wheelchair with flesh-eating bacterial infection after…